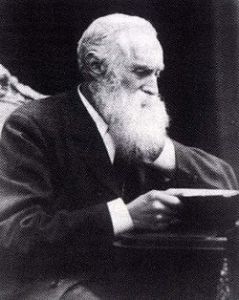 “The 175th anniversary of the birth of William Gibson Sloan fell on 4 September 2013. Sloan was the instigator of the Brethren movement in the Faeroe Islands, who by the time of his death in 1914, as a white-bearded, patriarchal figure, was known there as ‘Gamli Sloan’, ‘Old Sloan’. He was born in Dalry, in North Ayrshire, in Scotland, but it was in the Faeroes where he had great influence on religious life and, consequently, on Faeroese society. While the Brethren play only a negligible role in public life in most countries, in the Faeroes they are the largest Christian group outside the established church and the movement has had substantial influence in the archipelago. To commemorate the anniversary of Sloan’s birth, a large party of Faeroese went to Dalry on the day, where they visited his birthplace and had a short commemorative service in the town’s North Street Gospel Hall.”